Distinguishing Between a Mausoleum and a Columbarium

The terms “mausoleum” and “columbarium” are frequently used interchangeably. However, the actual purpose of each of these memorial buildings is distinct. If you are planning a funeral near Oakland , continue reading to learn about the differences between a mausoleum and a columbarium. 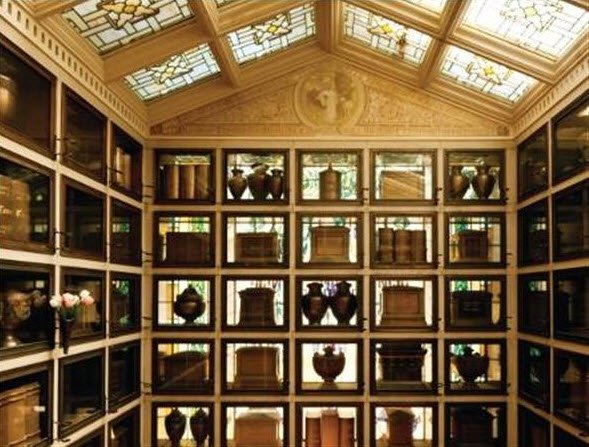 The origin of the word columbarium is the Latin word columba , meaning dove. The first columbaria were used in Ancient Rome and had nothing to do with human memorials. Instead, they were homes for groups of pigeons and doves. Those columbaria had thousands, or even hundreds of thousands, of small shelves designed to house birds. Today’s columbaria have a similar design, except the shelves are used to house cremation urns. Columbaria were not associated with human memorials until Buddhists in ancient Asia built elaborate columbaria for cremation urns. Mausoleums have always been associated with human memorials. The first mausoleum was designed for the ancient Persian King Mausolus and his family members. The tradition became so popular that the term “mausoleum” came into standard use.

Both a mausoleum and a columbarium are permanent public memorials for large groups of people. Both memorials can house dozens or even hundreds of remains. Mausoleums, however, are designed for entire bodies. On the other hand, columbaria are designed to hold cremation urns .

Many modern memorial buildings are designed to house both bodies and cremation urns. In many cases, mausoleum is the term used for these modern memorial buildings. Columbarium is sometimes a term reserved for elaborate memorial structures. Many cemeteries and religious structures have a columbarium built into the grounds. Both mausoleums and columbaria do not have specific religious connotations; in fact, many of them are designed to hold the remains of people from many different faith backgrounds.

If you have recently lost a loved one, you do not have to go through the funeral planning process alone. For help in planning a funeral ceremony , call Chapel of the Chimes in Oakland at (510) 992-6984. We offer cremation services, funeral planning, grief support, and more.